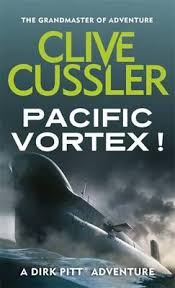 Dirk Pitt, a major in the American air force and director of special projects at Numa is having a quiet day at a secluded Hawaiian beach when he spots something floating in the water. Curiosity gets the better of him and swims out to retrieve it, in doing so he finds himself in the midst of a dangerous mystery – the object he spots is a message capsule from a missing nuclear submarine, and he is drafted in to help find and retrieve the submarine.

Making the job more difficult is the fact that the submarine is not the only vessel to go missing, dozens have disappeared over the years in an area called the Pacific Vortex. Before he can find and recover the submarine, Pitt is going to have to solve the mystery that is the Vortex, which will put him in the middle of a beautiful woman and a dangerous man – is he up to the task.

This is a short book, compared to later entries in the series, with a less complex plot, but as an introduction to the series and it’s main character, it’s well done and enjoyable. As with many of the books in the Dirk Pitt series, there’s a hint, perhaps more than a hint, of James Bond, both in the character of Pitt and in the other elements of the book, there’s nothing wrong with that, though.

Pitt is a very well constructed character – you learn more about him as the book progresses, which is much better than learning it all at the beginning, and he is someone I’m always keen to read more about. As I said, the story isn’t complex, but it has enough going on to keep the reader interested, and the ending is tragically triumphant, with the bad guy beaten, but at a cost.

What I think makes Cussler’s action adventure series, even this lightweight opener, better than many others is the way the lead character feels; he feels his physical injuries when something happens to him, and that affects what he is able to do later in the; this is in contract to characters like Bond who are half dead in one seen and fighting fit in the next. Pitt also feels the weight of events, his personality stays essentially the same but there are tiny changes that show he is affected by the things he goes through.

Overall this is very enjoyable, and if you haven’t yet gotten into the Dirt Pitt/Numa series, I definitely recommend starting at the beginning.