Earlier in the year I featured Andria Stone and her book Edge of the Future (you can see the post here) and now she’s back with the sequel, Edge of the Stars.

Edge of The Stars

“I’ve been tortured by a crazy woman, and have sparred with Von Radach. There’s nothing you can do to me that even comes close.” 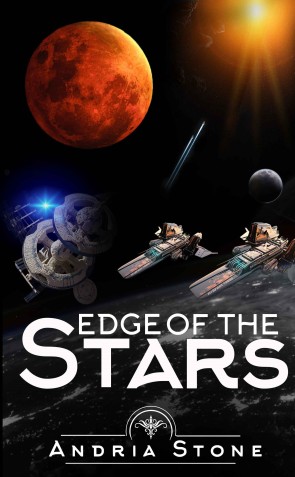 Mars invites scientists to participate in terraforming experiments which brings the MAVREK team all the way from Terra. But minutes after landing on the space station, Dr. Mark Warren is accused of murder.

The warm welcome continues with an attack on his spaceship, then three Terrans are found dead, and killer cyborgs are spotted. Authorities immediately conduct a massive hunt throughout Martian space and terrible new enemies surface with a direct link to Warren’s old nemesis.

On the planet, the same fugitives hunting Warren also threaten the downfall of Mars itself. The high-octane x-military MAVREK crew battles arms dealers, mercenaries, an infamous hacker, clone trafficking, and an insidious female enemy who will kill to avoid capture. Perhaps they’ll save Mars…if they don’t die first.

Edge of the Stars is an action-packed Science Fiction military thriller, with everything sci-fi fans love – starships, space colonies, cyborgs, secret military and medical technology and even a bad-ass villain.

If that has you interested, you can get the book here for the bargain price of 99c, and if you haven’t read book 1 yet, Edge of the Future is also only 99c.