Ember Moore, a Reaper, just wants to get through high school. She isn’t ready to save the world.

The Reapers are the police of the kindred races. They keep peace and law under the command of the Spirit Assembly. Until a dangerous cult, sworn to resurrect the last Phoenix, rises up to remove all opposition to their goal.

When a shocking betrayal rips Ember’s family apart, Ember, her brother Liam, and a mysterious girl named Billie must turn to their sworn enemy for protection. An unexpected alliance will be forged. And a dangerous path will chosen.

Will Ember and the people close to her survive the coming war?

It was Ember’s first hunt. So of course she was the bait.

Ember Moore’s fingers grazed the handgun under her coat. She pulled her hand back. She couldn’t act suspicious, especially not here and now.
She smiled at a customer pushing an overflowing cart of groceries. He ignored her.
The supermarket was packed, which was going to make Ember’s job harder. Then again, her job was never easy.
Ember passed an older couple and glanced around. She couldn’t see her father or her brother in the crowd. That was good, Ember told herself. If she couldn’t find them, neither could their target.
Ember’s acute senses instinctively picked a kindred out of the crowd. It was a young mother whom Ember identified as a wereseal, also known as a selkie. The poor woman had a screaming toddler and looked exhausted.
Ember couldn’t let them get caught in the middle of this.
She stepped over to the selkie and put a hand on her arm. The woman glanced at her sharply.
Ember smiled. “Good afternoon, ma’am.”
The selkie jerked her arm away, her other hand moving protectively around her baby. “Who are you?”
Ember glanced around, but the other customers were too busy to notice her. She moved her gaze back to the selkie. She allowed the selkie to see her true form. It was nothing dramatic, only a subtle change to her features and physique. But every kindred was taught to know what Ember was.
The blood drained from the selkie’s face. “Reaper,” she whispered in horror.
Ember nodded, reverting back to her human self. She held up her empty hands. “I’m not here for you. I’m here for a different werekin. I suggest you go home. You wouldn’t want to get caught up in any drama.” She smiled humorlessly.
The selkie nodded, scooping her baby into her arms. She started to leave, then turned back to Ember. “Thank you.”
Ember blinked, a real smile creeping onto her lips. “You’re welcome.”
Then the selkie left, leaving her cart behind.
Ember rolled her shoulders. The butt of her nine millimeter handgun dug into her ribs. Ember’s left hand twitched, wanting to feel the familiar weight of the gun in her hands.
She shook her head. Not yet. She had to find the werekin first.
One scan around the packed aisle was enough to alert her to the presence of her target. Her gaze was drawn to a man in his early thirties. He appeared normal enough, but to Ember’s Reaper senses he screamed danger.
Ember blinked, allowing herself to see his true form. A hazy image of a hulking grizzly bear became superimposed over the man. So, he was a werebear.
He was browsing the pasta aisle with a bored look on his face. Ember smiled to herself. She was about to make his day a whole lot more interesting.
She made her way to him. Before she reached him, another, younger, man showed up. He whispered something in the target’s ear and they both went on high alert.
Ember turned her back to them and picked up a box of spaghetti noodles. She glanced over her shoulder. Her senses told her the newcomer was also a some race of shapeshifting kindred, but she wasn’t sure what.
Both werekin scanned the aisle, obviously having been tipped off about Ember and her family’s mission.
“Son of a kelpie,” Ember swore under her breath.
She focused on her father’s advice. Make a plan. Expect the plan to go wrong. Toss the plan out a window.
Ember spun around to face both werekin. She was only a couple yards from them.
She whipped out her handgun, reveling in the security it gave her. She narrowed her eyes as the werekins’ eyes widened in surprise.
Then Ember metaphorically tossed the plan out the window and squeezed the trigger.

If this has you interested, you can buy the book from Amazon at the following link
https://www.amazon.com/dp/B078H4HFWT/ 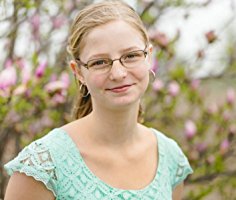 Grace Anthony is a homeschooled independent author in high school. She lives in rural Illinois and is a passionate reader, writer, and cat lover. She is often found writing on a blue laptop affectionately dubbed Saphira. She is a self-proclaimed chocoholic, introvert, and is addicted to coffee. She plans on writing many more books in the future.
If you would like to find out more about Grace, you can find her at the following social media links