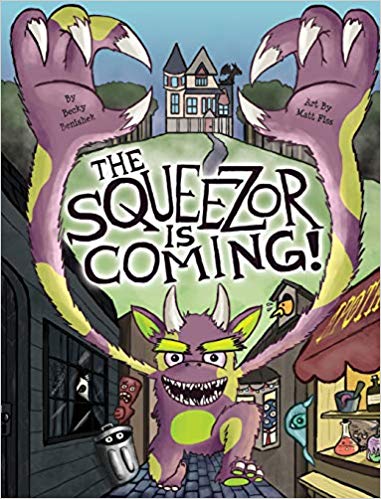 The Squeezor is Coming! is a children’s book written by Becky Benishek and illustrated by Matt Fiss.

The Squeezor is a friendly monster who just wants to give hugs, but he looks so scary, other monsters run away from him! How can he get them to look past his appearance and be friends? Then he gets an idea: It isn’t about what he wants, but what the other monsters need.

“With professional writing and exquisite illustrations, a universal truth and message come to life through the graces of a monster.” – Starred review by Joel R. Dennstedt for Readers’ Favorite

Monsters overflow in Becky Benishek’s new children’s book about the power of empathy and why it’s so important not to judge on appearances. Your whole family will enjoy the imagery and important lessons underneath it all.

Buy THE SQUEEZOR IS COMING! now:

Directly from the publisher: https://mcp-store.com/store/the-squeezor-is-coming

Becky Benishek has a B.A. degree in English, and is the author of several children’s books, including Hush, Mouse!, What’s At the End of Your Nose?, and Dr. Guinea Pig George. She loves to create stories that help children believe in themselves, and find the magic in ordinary things. Becky is married with guinea pigs.

“Far too many kids feel as unlovable as the Squeezor, and this story is for them. Benishek’s droll and humorous story will please everyone in the room and maybe especially those adults who are still kids at heart. Matt Fiss’s brilliantly grotesque illustrations make this book one to linger over and read again and again and again. Literally. It’s that good.” – Jack Magnus for Readers’ Favorite

“This story is highly recommended for young readers, especially for those who find acceptance by others as a challenge.”–Bruce Arrington for Readers’ Favorite

“With professional writing and exquisite illustrations, a universal truth and message come to life through the graces of a monster. And if monsters can make friends with monsters, what’s not left for which to hope?”-Joel R. Dennstedt for Readers’ Favorite

“Oh. My. Gosh. I’m SO in love with this one. . .from cover to cover. . .an absolutely perfect read!”-Miranda Reads, top Goodreads reviewer

“This wonderful story teaches two significant lessons: acceptance of others who are different and self-acceptance.”–Erica Graham, author of the Talking Tales series

“This is not just another story book. It has a strong scholastic element to it . . . This story will turn the readers into givers and social enthusiasts.”– Ashish Kejriwal

“Kids will love the book’s splashy color, monsters aplenty, and gross-out humor. Parents will love the story’s durable lesson: be yourself.”– Terry Vittone

“The characters are so alive that I often find myself wondering what they’re up to right now. Kids will love meeting Graywick (the Apothecaryterror)… Bitey (the scared [yes, scared!] vampire who wears BUNNY SLIPPERS)… Grumpypuss (who looks like a bundle)… and the full cast of marvelous monsters who inhabit Ghastly Gigapolis — and ostracize the big-hearted Squeezor (who through his kindness eventually succeeds in making friends with everyone). This book is SO fun to read and every page is a delight for kids’ imaginations.”-Lemon

The Squeezor is a monster who loves to give hugs. Great, big, wrap-his-arms-around-you-twice, squeezy hugs.

The trouble is, the Squeezor doesn’t look like he just wants to give you a hug. He looks like he wants to eat you up!

“The Squeezor is coming!” all the other monsters would shout when he came to the nearest town, Ghastly Gigapolis, for supplies.

From behind shop doors and curtains, from roof peaks and from alleyways, from third-floor house windows and through cellar-door slats, monsters furry or feathered, scaly or slimy, big or small, quivered as the Squeezor stumped along the sidewalk on his squat legs and big, squashy feet with three greasy toenails each.

They trembled at the sight of his giant, curved horns and frightfully fanged grin. Even the fur on his big blocky shape looked all wrong—a sickly, saggy mix of lime green, purplish brown, and mustard yellow.

And they were practically petrified at the chillingly sharp claws that glinted at the end of the Squeezor’s wrap-around-you-twice arms!

This made the Squeezor very sad.

“It’s not my fault I look this way,” he said to himself one day as he sat in his lonely house up in Vile Vale. “I don’t want to hurt anybody. How can I get everyone to trust me?”

The Squeezor stayed home all that day to think. He didn’t have to worry about being disturbed because nobody ever came to visit him.

He wandered into his library and leafed aimlessly through 7 Habits of Highly Disgruntled Monsters; then he read, How to Stop Worrying and Start Eating, and he finished up with, I’m Okay, You’re Decaying.

None of them helped, not even the one called, First Things First: 10 Tasks to Sink Your Teeth Through.

He went into his kitchen and half-heartedly stirred up a pot of his favorite, putrid green tomato soup and slowly munched a moldy grilled cheese sandwich.

He didn’t really feel hungry, though, and wasn’t even tempted by the box of Nose Nougats on the counter.

He switched on the television in the living room to look for an advice show. One of the channels was running a marathon of Game of Bones, and he’d watched two and a half episodes before he realized it.

The Squeezor didn’t even like Game of Bones. He switched off the set.

“How can I change anything when I can’t even figure out what to do with myself?” he grumbled as he wandered around his house.

Just then, he stopped short in the hallway, under a portrait of his Great-Grandmother Squeezums, who always seemed to be glaring lovingly at the Squeezor.

“Maybe that’s it!” he said. “Maybe it’s not myself that I have to figure out.”

The Squeezor, excited now, heated up another bowl of putrid green tomato soup, ate half the box of Nose Nougats (the box itself was edible), and didn’t go to bed until he had a plan.

“With professional writing and exquisite illustrations, a universal truth and message come to life through the graces of a monster.” – Starred review by Joel R. Dennstedt for Readers’ Favorite

Monsters overflow with a great message and fun reading for kids AND adults in @beckybenishek’s new book. Get THE SQUEEZOR IS COMING! at https:/bit.ly/SqueezorMCP.